XC course walk at Aspen Farm Horse Trials, Beginner Novice...
(I took these after the event, was too nervous to do it before!) 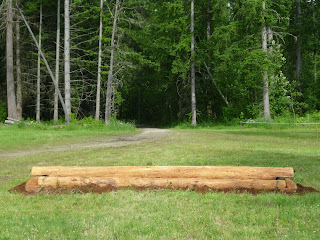 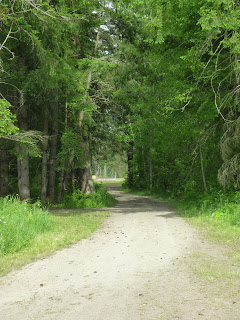 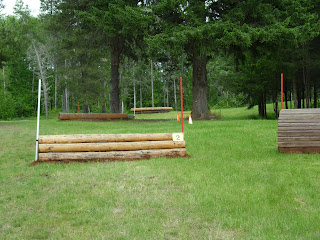 2- Logs next to a big dark scary jump. He was overwhelmed by his surroundings and we had our only refusal here... 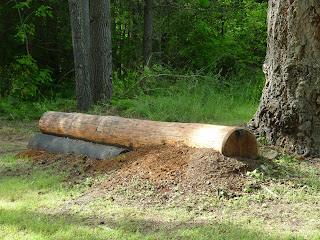 Log jump in the speckled shade, I was worried about this one because the lighting was really harsh and the jump was hard to see. Wasn't a problem. 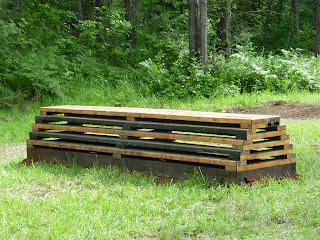 Around a bend and... Spooky slatty thing. I was nervous about this one because of all the light coming through it, it almost seemed to move as you approached it. I believe we cleared this one by about twice the height and depth needed. 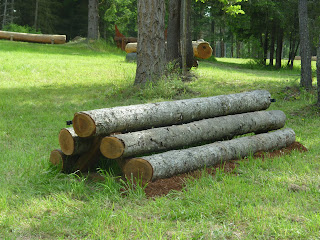 After the slatty thing he found his pace. He pulled me to these big logs on a slight uphill slope. Up the hill, bend to the right and... 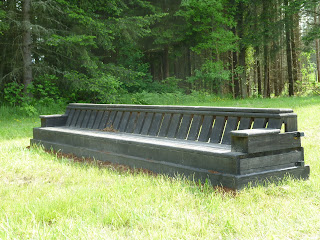 What the hell? This was dark and slatty. I decided to trot from a long ways away so he could get a look at it as long as possible before we got here. He came to a trot, saw the jump, broke into a canter and sailed over it. 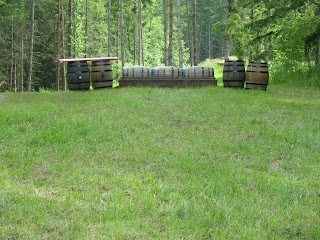 Bend left and... huge barrels. The worst part was that it looked like you were jumping out into space as it was at the top of a hill. You couldn't even see the landing until about 2 or 3 strides out, so I chose to trot to this one as well. Jasper, however, was having none of the trotting stuff and about here picked up the canter and popped over it out of stride. 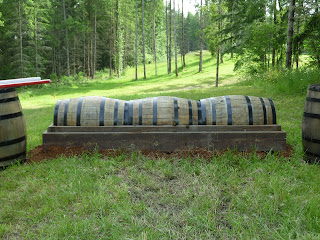 After the barrels was a pretty steep downhill gallop, then back up... 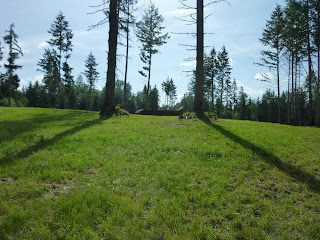 The approach to the next fence. This one was big and intimidating and at the top of a pretty good hill. Right before you got there the water complex appeared on the right, white land marking tape in front, and a big downhill on the left. 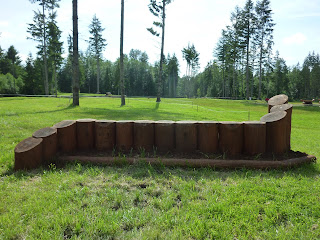 I didn't want to trot because I was worried about losing power on the hill and felt we needed a pretty strong canter to get over it. This was one of my biggest concerns. Jasper didn't even hesitate. 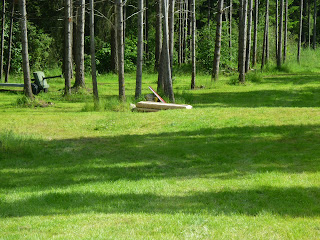 Left bend down a long hill to this jump hidden in the hillside. Cantered part way down, lost balance, and trotted. Picked up the canter, steered off the main thoroughfare and he pulled me to this one. 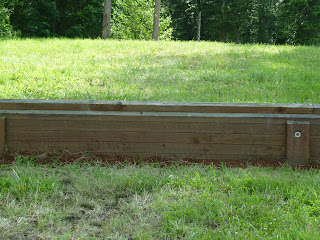 180 degree turn and back up the hill. Left bend to the up bank. I wasn't worried about this and he sailed up it. Maybe a bit fast... 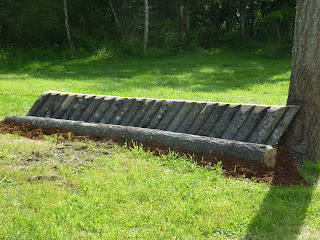 Closely followed by this one on a downhill slope. We schooled this one at the clinic, whew! 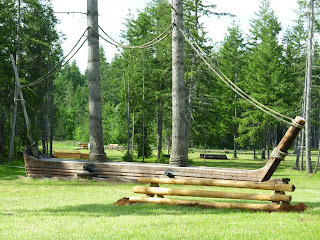 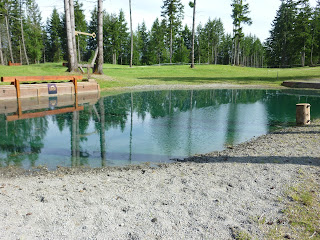 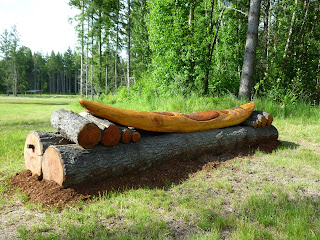 180 degree left hand turn and over the kayak. He took a good look at this one but didn't hesitate. 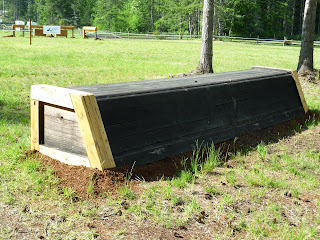 Last fence on course- giant black jump of doom. At 1:08 in the afternoon it was in the shade. It was a giant dark imposing shadow. It was huge, no one could believe it was on a BN course. This was a big concern as well due to it's size... needed a big canter/gallop. I started preparing for this one a long ways back, pulling his head up, leg on, clucking... he didn't seem to see what the big deal was.

OK, more later, finished up my working student experience and the pony and I got home this evening. Woot!
Posted by Albigears at 9:17 PM

I like the look of those jumps - solid but inviting. Sounds like he's really getting his head around it!

What a beautiful place, with a lovely course! Sounds like Mr. Jasper did a good job! Did you get any photos of the two of you on course?

That course looks AWESOME! Nice fences! Glad you had a great time!

OH YEAH! That course looks SO FUN. And sounds like yall did GREAT! Can't wait to hear more! I hope you got pics!

Wow!! I am soooo jealous! Sounds like y'all did great! Way to go Jasper!

YOU and Jasper are so totally COOL!!! That course looks really great...and I recently at the beach told Wa to get over her fear of logs and wood stuffs..because of what you showed us in your photo's!!
Fantastic!!
It all sounded/looked, pretty exciting.
And I particularly loved the way...you'd pick something out, you THOUGHT, may be difficult... and Jasper, he told you otherwise! He is so great!

Mind if I link to you-In an upcoming post?
KK

I couldn't have been more pleased. More info coming later, I ordered pics. We WON the dressage with a 29.5 (70.5 in "real" dressage), had one rail down in stadium (only 6 clear rounds out of 20)and stayed in first, had one XC refusal and dropped to 8th. Really surprising and amazing experience.

Go you! The courses all seemed pretty challenging. I walked the Novice course and though it looked like a blast but definitely had some solid questions.

I guess I misheard the loudspeaker, lol - I thought it said you were in third after dressage, but it was first! It's so awesome that you held onto your lead for the first two rounds. And Jasper is turning into a confident eventer!

YAY you! I'm so happy that this was such a confidence builder for you and mostly it sounds like for Jas! Any chance of pics of you aboard him during any of your three phases? Those jumps look like FUN! I had a lesson yesterday, and Jackson is moving along. My instructor gets upset because I don't bear compliments, I want to FIX everything. Oh well, I must work on that for sure! So glad you had such fun!

You guys are awesome. I am so proud!
See, there is a reason things didn't work out with the other horses you looked at . . . ;)

Albigears
Spokane, WA, United States
I wanted to event for years and in the spring of 2009 found a partner to do it with. Jasper is an off-the-track Thoroughbred from Portland Meadows who never made it to his first race. Smart, forward thinking, willing, a lover not a fighter... and who could resist that face? 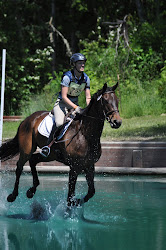 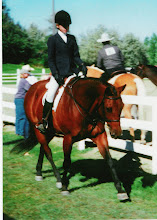 April: Jasper and I move to Yelm, WA for dressage training- I am a working student for Jessica Wisdom.

Stadium: A wild and crazy ride, but only one rail down. We're still in first.

XC: Awesome. A refusal at the second fence, but soon found his stride and pulled me to the jumps. 8th place overall.

Back home to Spokane!

Dressage: 27
XC: Clear
Stadium: Clear
Place: First!
We also got an award for having the lowest overall score.

July: Jumping lesson with Betty Hirst. She taught me to ride when I was in elementary school and I rode with her until I went to college. I hadn't seen her in 15 years!

April: Jasper retires from training to become a racehorse due to his lack of wanting to go fast and comes home with meeeeeee.